If anyone knows the meaning of the song: "I never promised you a rose garden, along with the sunshine, there has to be a little rain sometimes", it is Jame.

During his five year education to become a Computer Engineer/Teacher at Rajamangla University Jame had his fair share of 'rain". He once entered into an open conflict with one of his teachers which almost ended in Jame getting kicked out of university. But luckily last minute and after intervention by Fund Isaan, Jame got a new supervisor, improved his attitude and succesfully graduated earlier this year.

Jame is now working as an interim IT teacher at Surin Technical College and even plans to go for his teachers certificate, which will land him a job at a public school as a civil servant, giving him greater job certainty.

He still plans to work in the industry for a few years before becoming a teacher for life.

We know Jame is an extremely smart young man with a strong will and we are very proud of him that he didn't give up when "the going got tough". He has everything it takes to become a succesful business man or teacher, whatever his final choice will be.

All the best Jame! 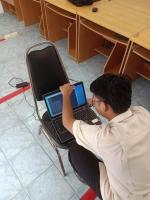